Popularized in California, notably the Bay area, Gelato is a Cookies Fam genetic that is a real showstopper due to its unique flavor pallet. The Gelato cultivar had many phenotypes released, the #33 being one of the most sought after. Its smell has an uncanny resemblance to cold sherbet and gelato ice creams, giving it a rich, creamy taste and a very sweet, desert-like aroma. Gelato #33 has a hybrid effect, starting with a euphoric head high that later transcends into physical relaxation. 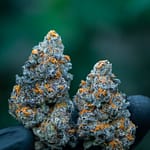 OUR GARDEN IS PLENTIFUL

SEE OUR OTHER GENETICS
MORE FLAVORS